Email ThisBlogThis!Share to TwitterShare to FacebookShare to Pinterest
Labels: Hypogastrura

I've been playing with darkfield microscopy - poor man's phase contrast. Darkfield uses obliqe illumination as a cheap optical trick to increase the contrast of transparent and traslucent specimens. It can produce dramatic images with dark backgrounds and usually features prominently in microscope photography competitions such as Nikon's Small Worlds. I started out with the somewhat translucent furca of a handy Isotomurus unifasciatus specimen. On the left is my conventional setup of top plus bottom illumination, post processed; on the right darkfield transillumination, both stacked with Zerene: 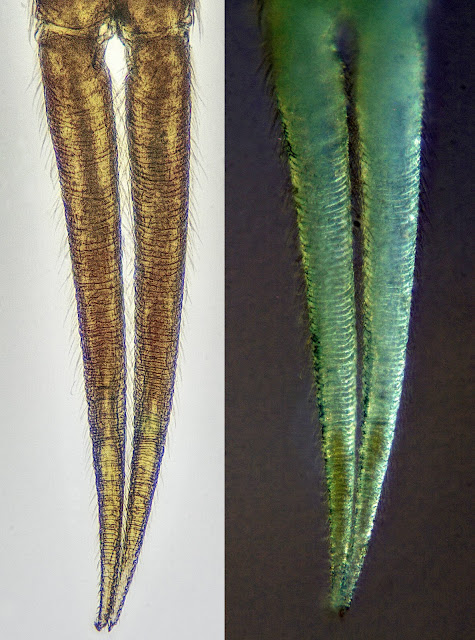 The problem here is that inserting the darkfield disc into the light path lengthens the exposure time 20-fold and the image quality suffers as a result. Looking at the non-transparent abdomen of the same specimen (conventional illumination): 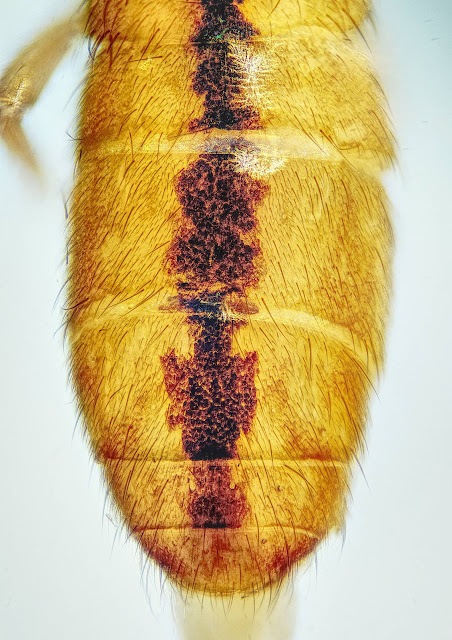 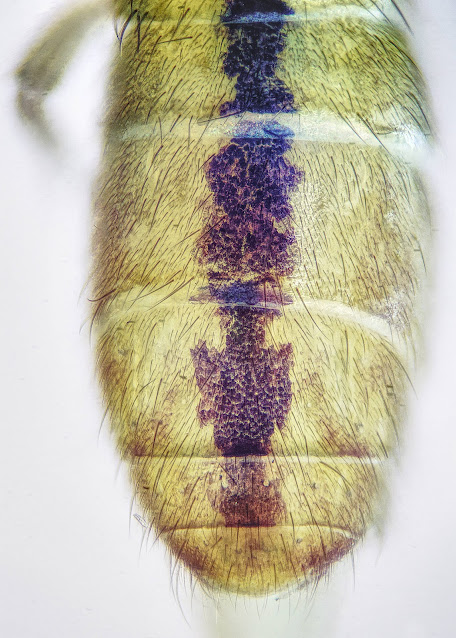 I think this is the better result, but clearly I need to find some transparent specimens to get maximum benefit from darkfield. 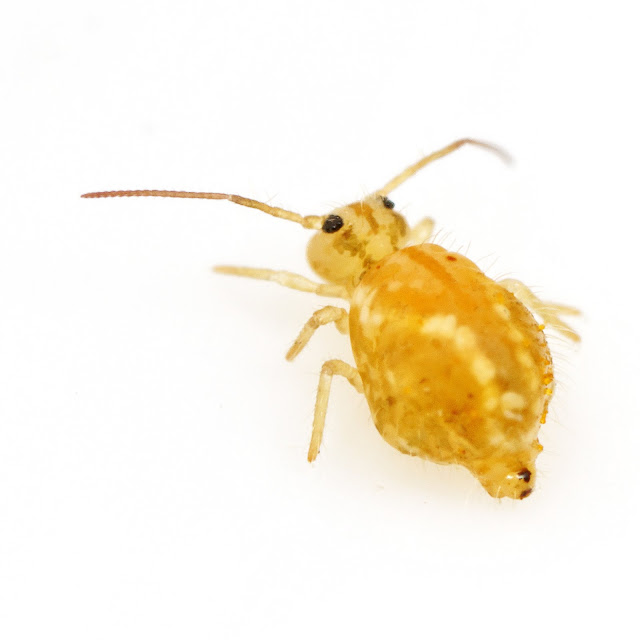 I have to admit that springtails have been on the back burner recently while I've been focusing mostly on spiders. The weather hasn't helped but it's not an excuse, mostly I've been working on spiders. I have been recording springtails regularly, but I haven't posted anything publicly because I haven't found anything particularly interesting - until today. This morning the vacuum sampler turned up a whole bunch of these. After some rusty fumbling, they keyed out to be Sminthurus viridis (which I have found several times recently), but specifically Sminthurus viridis ssp. cinereoviridis (thanks to Frans Janssens for help with the I.D.).

Sminthurus viridis ssp. cinereoviridis has 2 spots on small abdomen. In the ecovariant nigromaculatus of S. viridis, 3 spots are present: https://www.collembola.org/images/stach/1956/Sminthurus-viridis-1956-J-Stach-Poland-PlateXXXII-Fig3.jpg There are supposedly difference in chaetotaxy of the setae on the subcoxa of the third leg, but I have found it impossible to image these. Steve Hopkins was reluctant to accept nigromaculatus as a separate species. As a dyed-in-the-wool taxonomic lumper, I wouldn't disagree. Frans Janssens calls it "Sminthurus viridis (ecovariant nigromaculatus)", which is said to be associated with sandy areas, heathland, moors, heather, etc. My specimens came from the wettest of wet water meadows alongside the River Soar and have 2 abdominal spots, so Sminthurus viridis ssp. cinereoviridis it is.


Posted by AJ Cann No comments:


Posted by AJ Cann No comments: 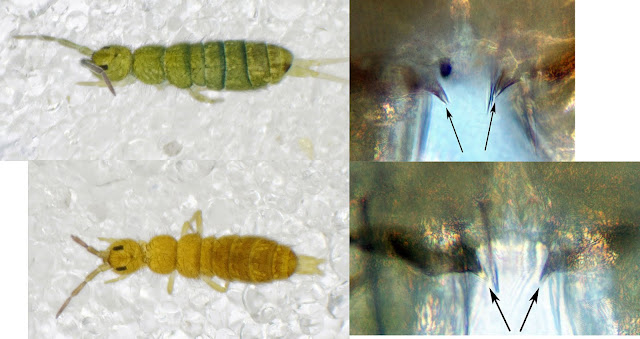 For those who think they can tell Isotoma viridis from other Isotoma by the colour alone - two Isotoma viridis specimens from the same sample, one green, one not, confirmed by the manubrial teeth.

Email ThisBlogThis!Share to TwitterShare to FacebookShare to Pinterest
Labels: Isotoma 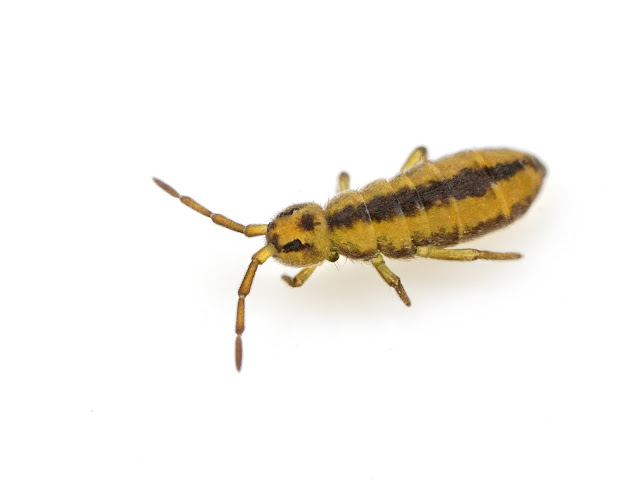 I recently bought myself a G-vac - for the uninitiated, a cordless garden leaf vacuum adapted for use as a bug vac - and I took it for its second outing this morning. How do you convert a leaf vacuum to a bug vac? Well essentially you tape a net bag over the mouth of the inlet tube. On a recommendation from a more experienced bug-vaccer I bought a nylon jam strainer bag to use for this (others use net curtain material). Now I will admit that the primary reason I bought the bug-vac was for spider work, and I wan't at all sure the jam strainer bag would retain insects as small as springtails, but on its first outing a couple of days ago I was delighted to find it worked with large spiders all the way down to springtails, including the little ones such as Lepidocyrtus.

A week or so ago, pre-vac, I had done some sampling in wet meadows beside the River Soar. At that time I'd spotted a patch of Juncus sitting in a damp hollow that looked interesting but I didn't have time to go there on my first visit. This morning I decided to go back and take a look, this time armed with the bug-vac. Bearing in mind this is a piece of electrical equipment, albeit double insulated to EU standards and designed to suck up wet leaves, I'm pretty cautious about mixing electricity and water because the 36V battery in the bug-vac could give out quite a jolt. I was therefore a bit alarmed that the bug-vac started spitting water out of the inlet when I stuck it in the Juncus, but the point of all this dicing with death is that the bug-vac turned up (alongside more run of the mill species) my first ever Isotomurus plumosus in VC55. I'm delighted but I won't be pushing my luck too far. 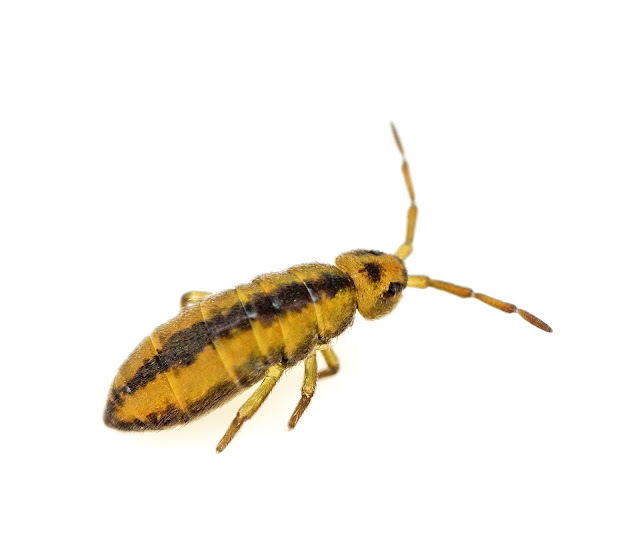 Recently, I've been thinking a lot about occupancy models for invertebrates. Other taxa, notably birds and butterflies (through the BTO Wetland Bird Survey and Butterfly Conservation's UK Butterfly Monitoring Scheme (UKBMS), respectively) have good negative data, i.e. an indication of where species are absent as well as where they are present. For most invertebrate taxa, partly because of lack of resource (recording effort) but mostly because of the inefficiency of recording (how can you be sure a springtail is absent from a particular area?), all we have are "White Holes" - gaps in the data which are difficult to interpret. This makes occupancy models difficult if not impossible to derive. The alternative is to fall back to benchmark species as indicators of recording coverage. Previously (Progress on the VC55 Springtail Atlas) I discussed the use of Orchesella cincta as a benchmark species for springtails. While the ubiquity of this species is a good reason to think that this is a valid choice, I've never actually tested the hypothesis - so here we go.

Heatmaps are pretty but inevitably focus attention on where the data is, rather than where it is missing. As an attempt to try to switch the emphasis I have used quadrat mapping - arbitrarily dividing VC55 into a grid and looking at the number of records within each section. A 25x25 grid worked but the the intervals were a bit small and a 10x10 grid is more informative (all VC55 Collembola records to end 2018): 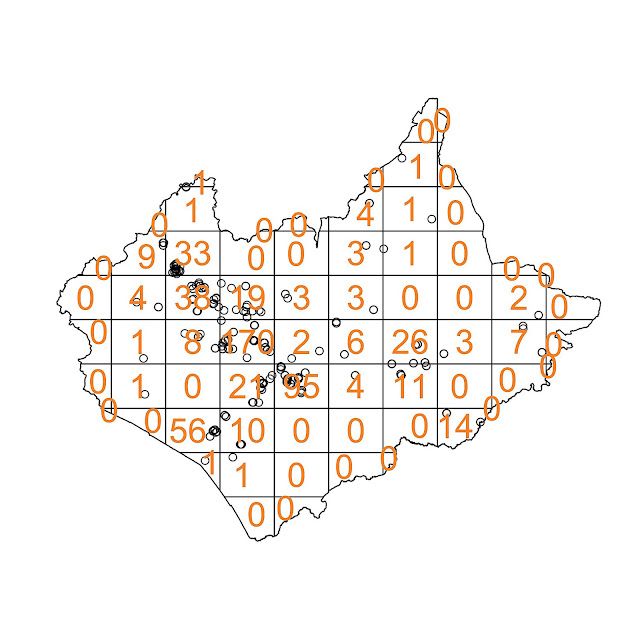 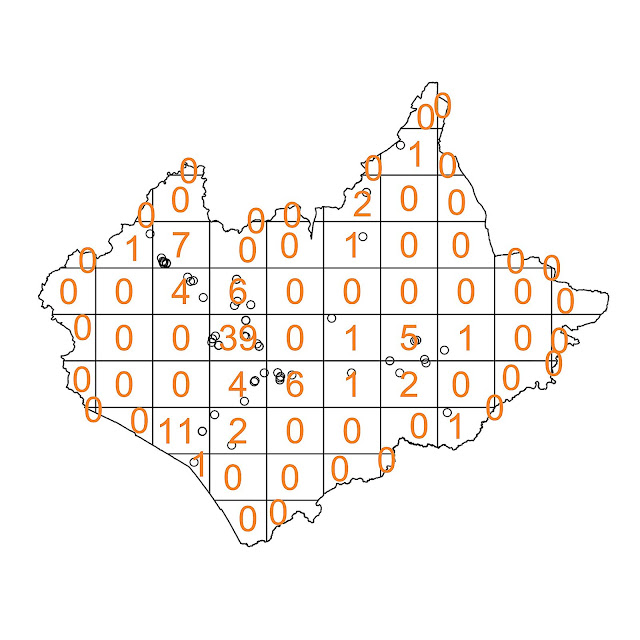 To make sense of this, I converted the distributions into histograms: 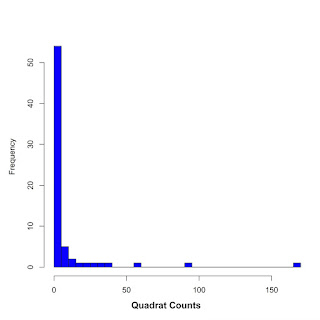 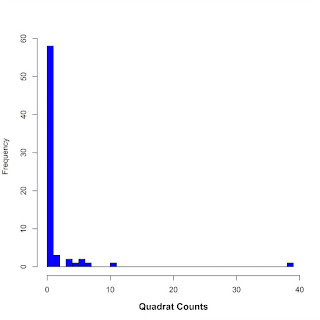 These look pretty similar, but to be sure, I ran some further analysis: 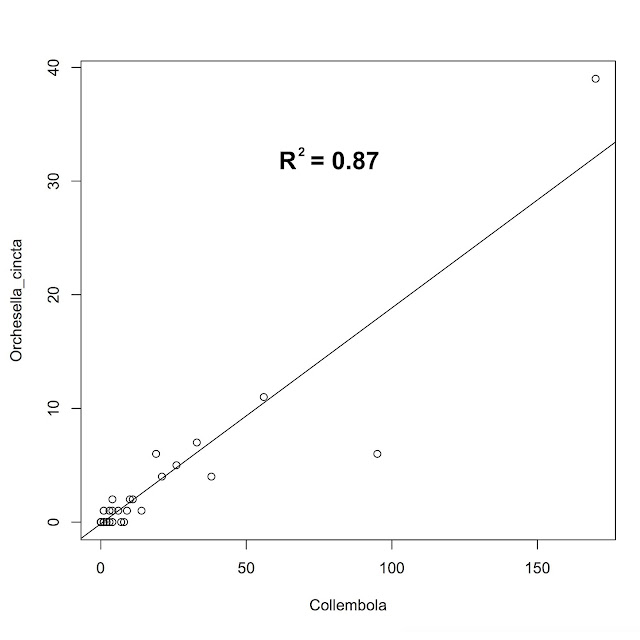 There's a good correlation between the Orchesella cincta distribution and the overall Collembola dataset, and this is statistically significant (p = 2.2e-16). Thus Orchesella cincta is a good benchmark for springtail recording effort (at least in VC55). Phew! 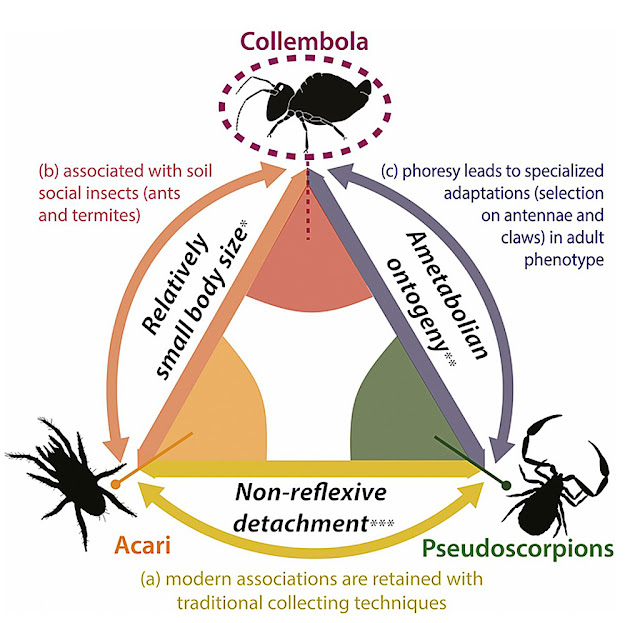 Springtails (Collembola) are reported since the Lower Devonian and are thought to have originally been subterranean. The order Symphypleona is known since the early Cretaceous with genera distributed on every continent. This implies an ability to disperse over oceans, however symphypleonan Collembola have never been reported in marine water contrary to other springtail orders. Despite being highly widespread, modern springtails are rarely reported in any kind of biotic association. Interestingly, the fossil record has provided occasional occurrences of Symphypleona attached by the antennae onto the bodies of larger arthropods. Here we document the case of a ~ 16 Ma old fossil association: a winged termite and ant displaying not some, but 25 springtails attached or in close proximity to the body. By comparing the general constraints applying to the other wingless soil-dwelling arthropods known to disperse through phoresy, we suggest biases in the collection and observation of phoretic Symphypleona related to their reflexive detachment and infer that this behaviour continues today. The specific case of tree resin entrapment represents the (so far) only condition uncovering the phoretic dispersal mechanism of springtails - one of the oldest terrestrial arthropod lineages living today. 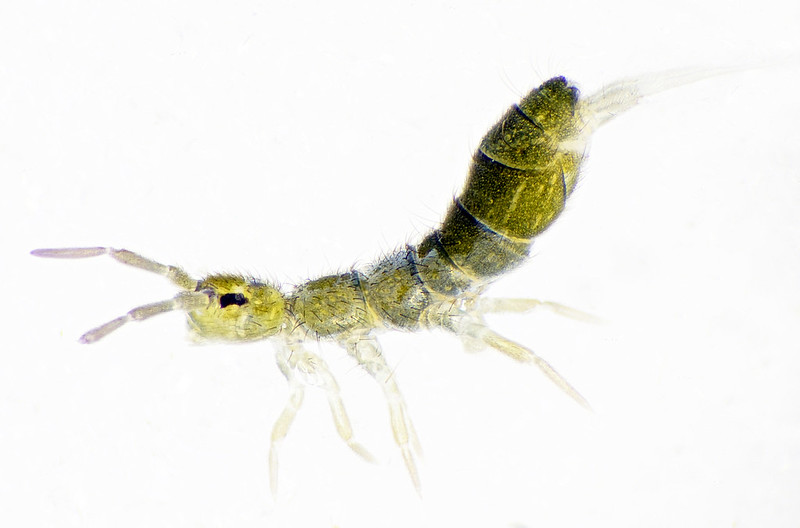 In spite of all the rain and good numbers of springtails over the last few weeks (dominated by Dicyrtomina saundersi), Isotomids have been largely missing. However, the recent haul of leaf litter had good number of Isotoma viridis, a species I have not seen since last winter. 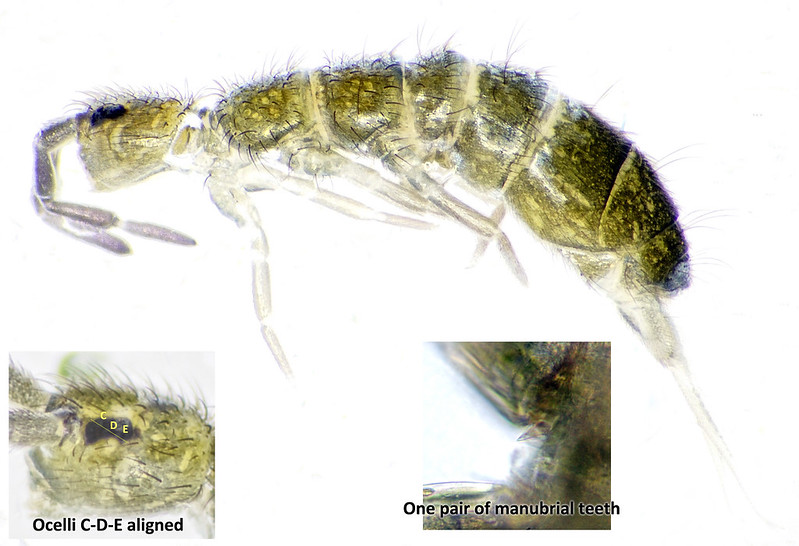